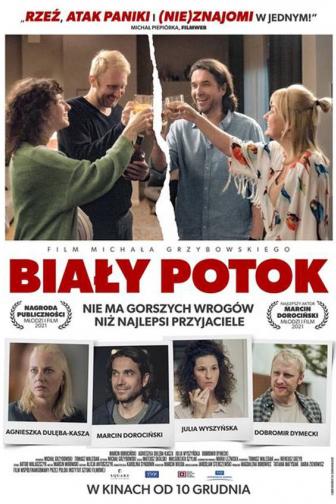 DIRECTORS NOTE
"Beloved neighbours" is a story about modern 30-40-year-olds. A portrayal of a certain generation shown through the distorted reflection of a comedy, it's also an attempt to take a refreshing look at some serious issues. My protagonists - two married couples - are representatives of the rich middle-class. The marriages of Ewa and Michal and Kasia and Bartek are facing many problems as they attempt to fulfill their dreams, with their decisions governed by feelings both large and small. Kasia, Bartek, Ewa and Michal have achieved a lot in life, both in their respective professional fields as well as their family lives. They could use the money they have earned to build a better tomorrow for themselves and their kids. Unfortunately, they fall victim to their own shortcomings, complexes and unfulfilled dreams, and all the resultant emotions. Finding themselves on the edge, they release the tension by engaging in destructive behaviour towards themselves and others. An additional obstacle they have to deal with is their inner inability to admit their own mistakes, which deprives them of the ability to think rationally. In all these situations, it's their children who suffer the most - Krzys and Borys - the married couples' teenage sons. They learn about adult life through observing their highly dysfunctional parents every time they lose control or lie to each other, for reasons unknown to the boys. "Beloved neighbours" is a story about why we take decisions that are clearly at odds with our best interests. What limits us, and why do we sometimes hurt those that we care about the most? Why is it that we can achieve so much, and then destroy everything in an instant? I believe this story will be able to move the audience and become a highly personal experience for them which will allow them to take a closer look at their own lives from a slightly different, more reflective, perspective. MICHAL GRZYBOWSKI

A comedy of errors about the vicissitudes of two married couples. Michal and Ewa lead a relatively stable life, which is governed by their good jobs and Ewa's second pregnancy. Kasia and Bartek, meanwhile, are facing severe financial problems. Unexpectedly for everyone, in the heat of a quarrel Kasia reveals to her husband that she once spent the night with Michal. In an instant, love and friendship are placed in doubt. The intricacies of their emotional and financial relations, along with their seemingly innocent little lies, lead to a spiral of misunderstandings. In this intimate atmosphere, emotions reach a peak as the absurd is accompanied by profoundly heart-touching moments. And then other people also start to get involved in the marital dispute - debt collectors, the police and a nosy neighbour. The chaos accelerates, creating many comedic situations, until the final tragedy, which also turnsout to be an opportunity for both married couples - a chance to save their love and friendship.
Vis mer
Annonse